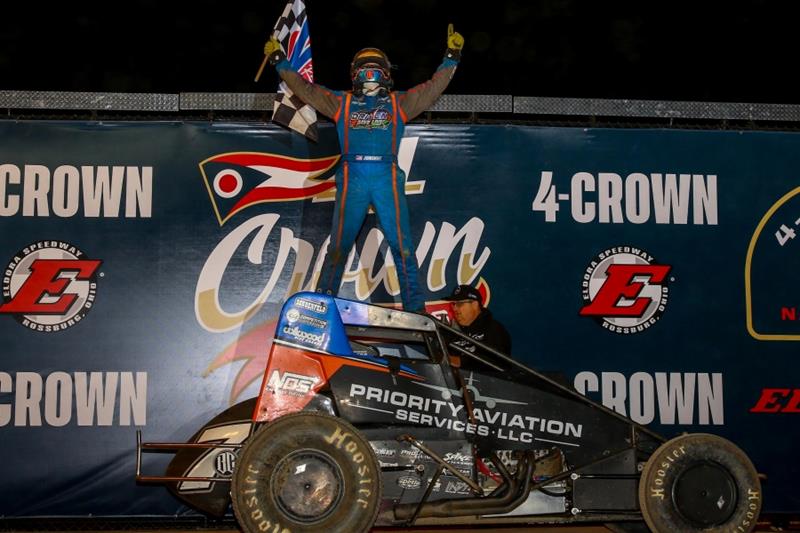 Rossburg, Ohio………To get to double-digits in the USAC AMSOIL National Sprint Car win column, you must win at Eldora Speedway.

Maybe it’s an omen, a harbinger or what have you, but history tells us as much.

Courtney reiterated that fact Saturday night during the 37th running of the “4-Crown Nationals” presented by NKT.TV, marking just the tenth occasion a driver has reached at least 10 series wins in a season and the 10th of those select drivers in that club to win at Eldora during their banner year.

However, the ride to get there on this night was a tad turbulent early on as the team ran into mechanical issues that forced them to swap out the engine for another bullet following qualifying.  It seemed to do the trick as Courtney walloped the competition in his heat race, then proceeded to decimate the field for much of the 30-lapper in his Clauson Marshall Newman Racing/Priority Aviation – Competition Suspension, Inc./Spike/Rider Chevy until having to hold off a late surge from hard-charging C.J. Leary left that fairytale ending hanging in the balance momentarily.

Courtney started from the pole position, but it was 2007 “4-Crown” USAC Sprint Car winner Robert Ballou who eked into the lead from his outside front row starting spot to lead the opening lap with Leary and Courtney in tow.

As Leary trailed Ballou, the reigning “4-Crown” Sprint Car winner was amidst a battle with Courtney for second.  Courtney threaded the dot of the i around the outside of Leary in turn two.  Leary then snagged the concrete and spun completely around down the back straightaway and somehow, someway, avoided catastrophe as the entire field missed him, allowing him to restart, although he would now have to come from the tail in 22nd.

Ballou’s bid to get back into the game hit a literal snag on the 14th lap when he clipped the turn two outside wall and spun around to a stop, ending his evening earlier than anticipated.  That moved Justin Grant into second where he and the hard-charging Leary took a full head a steam at running down Courtney.  Grant found the demise of his night in the same spot that took caught Leary and Ballou earlier in turn two.  Grant’s car churned against the concrete along the back straight before grinding to a halt with four laps remaining.

Leary was in second behind Courtney for the lap 27 restart, but a challenge to Courtney’s throne was discarded almost immediately as Courtney blitzed to a good jump when action resumed.  The only race for position was behind Courtney as Leary, Kevin Thomas, Jr. and Isaac Chapple roamed three-wide at times for the runner-up position.

It was all to Courtney’s advantage, however, as he drove away to his tenth series win of the year and joined Jack Hewitt, Kyle Larson, Jerry Coons, Jr. and Dave Darland as the fifth driver to win in a Midget, USAC Sprint Car and Silver Crown car during his “4-Crown” career.

Leary finished second ahead of Chapple, who scored a career-best third-place result.  Point leader Thomas was fourth ahead of Chris Windom.