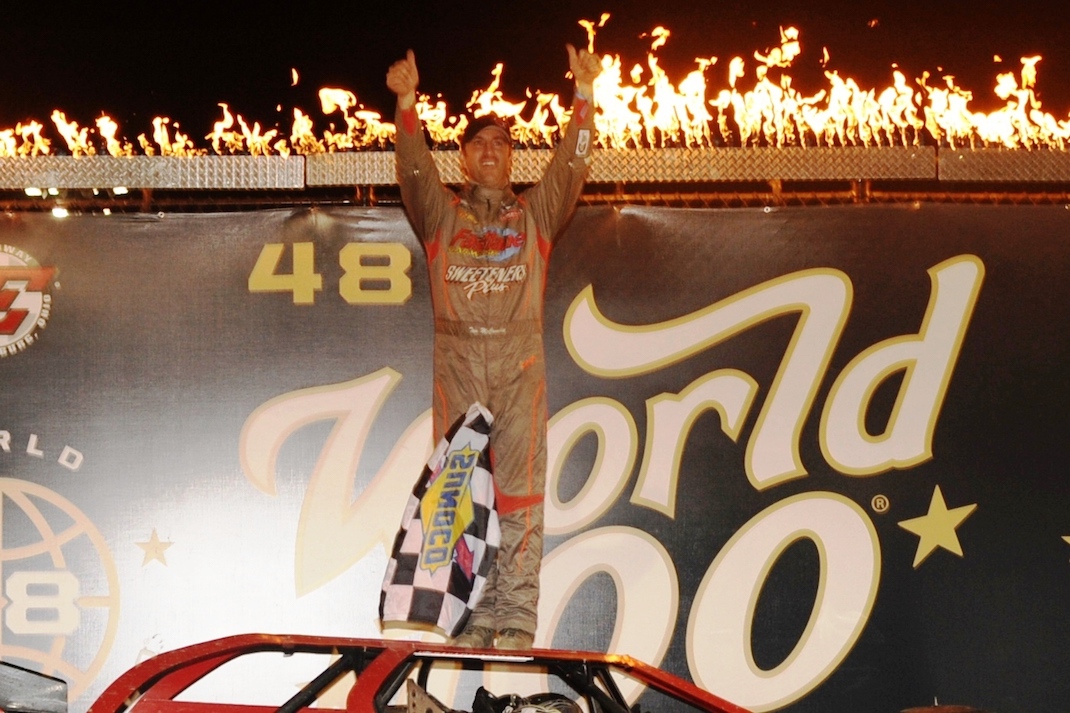 ROSSBURG, Ohio – Earlier in the day Tim McCreadie didn’t think his car was good enough to win the World 100 at Eldora Speedway.

McCreadie and his team made the right adjustments and bounced back to win the 48th edition of the biggest race in dirt late model racing. McCreadie took the lead from Eldora Late Model point leader Devin Gilpin on lap 45 and drove away from the field following a restart with 16 laps to go for the $51,000 payday.

After having to watch several World 100’s from the grandstands after not making the race, McCreadie seemed to be in disbelief to be sitting in victory lane.

“I’ve sat up there up there with you guys for a bunch of these features, so to be down here is pretty amazing,” McCreadie told the large crowd in victory lane. “There are a lot of people that complain about funding, but we just shut our months and keep digging along with what we’ve got.”

Gilpin led a majority of the first half of the main event with pressure from Shane Clanton in second spot. As the race went on Clanton dropped back and found himself in a race with McCreadie for second. On lap 29 McCreadie used his momentum off turn four to take away the runner up spot and pull away down the backstretch.

After taking the runner up spot, McCreadie quickly closed on Gilpin for the lead as the caution flag appeared on lap 36 when Mike Marlar slowed in turn one. Gilpin pulled away during the restart as McCreadie and Jimmy Owens ran side by side for the second spot. McCreadie retained the position and started to chip away at Gilpin’s lead.

After moving around the race track to build up momentum, McCreadie got a run off turn four on lap 45 to drive by Gilpin for the lead. McCreadie pulled away from the rest of the field while Scott Bloomquist drove by Owens for third and started to put pressure on Gilpin for second. Bloomquist and Gilpin raced side by side several times, with Gilpin holding on to the runner-up spot through the mid stages of the event.

Owens was able to take advantage of Bloomquist’s inability to pass Gilpin and took back the third spot on lap 67. Owens then passed Gilpiin for second and started his pursuit of McCreadie for the lead. McCreadie built up a lead of more than five seconds while racing through traffic with 20 laps to go.

With 16 laps to go the final caution flag of the event appeared when Bobby Pierce slowed on the frontstretch. McCreadie chose the inside line for the double file restart and showed he was unfazed by the late race yellow flag by driving away from the field after the restart.

Owens and Dennis Erb Jr. swapped the second spot a couple of times in the late stages of the feature, but McCreadie would not be seriously challenged the remainder of the event to win his first career World 100 victory. Owens, Erb, Blomquist and Brandon Overton rounded out the top five.

In victory lane McCreadie was ready to celebrate with the masses back at his small pickup truck and trailer in the pit area and was quick to praise the work his team has put in.

“It’s amazing the effort my team puts in while I get to go home and be with my wife and two kids, it’s pretty cool. I really don’t know what to say, I’m normally not lost for words. To see all people here and see how excited they are. We’ll be down here for a while, so make sure you stop by.”