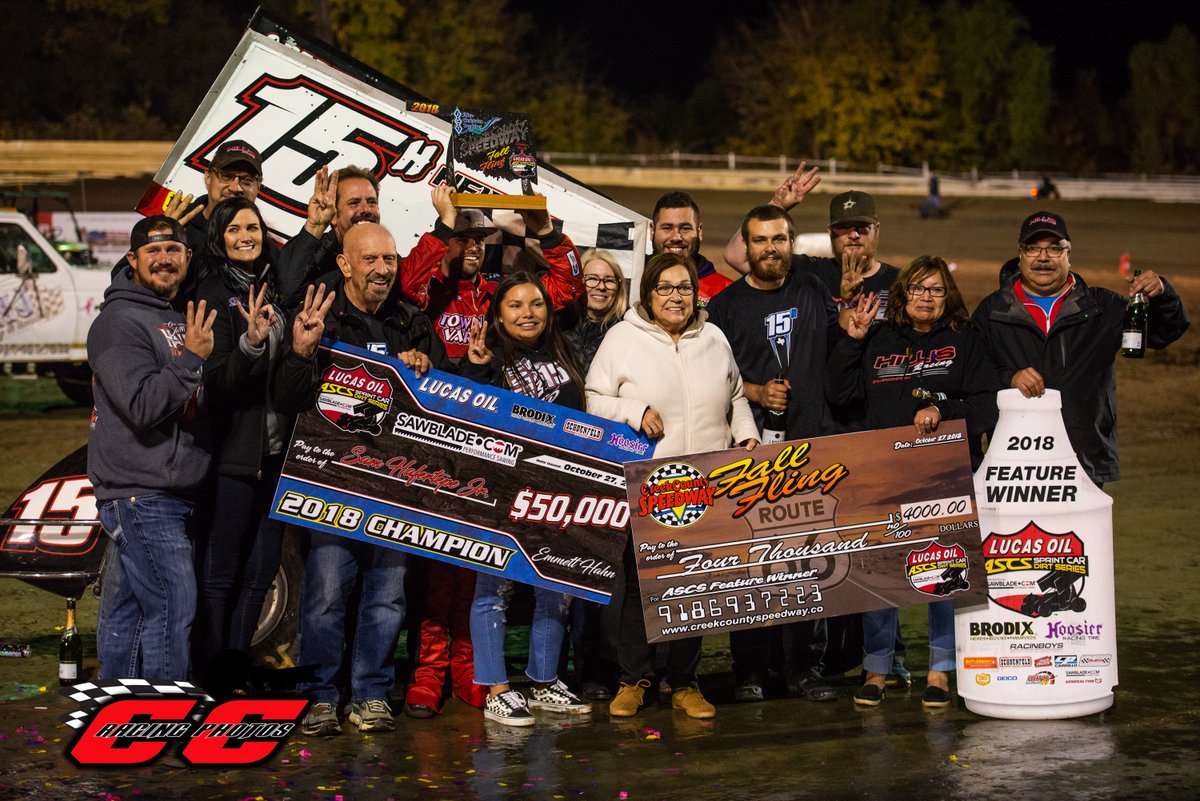 Bryan Hulbert – SAPULPA, Okla. (October 28, 2018) Adding a cherry to the top of his third consecutive championship, Sam Hafertepe, Jr. rode out of the John Christner Trucking Fall Fling with an extra $4,000 and his seventh victory over a stout field of 61 drivers at Creek County Speedway with the Lucas Oil American Sprint Car Series presented by Sawblade.com.

Trailing Sean McClelland the first 33 laps, Hafertepe made the top of turns one and two work after several laps of only being able to close on the back bumper of the D&E Supply No. 22. Fighting back for the top spot, McClelland was not able to regain the position.

“There is nothing like racing your best friend for 40 laps. That was probably one of the funnest races I’ve driven in my entire life. Me and Sean have been friends for a long time and for us to race like that and have our friendship last like it has, it means a lot, then to win this deal and show everybody who deserves this championship. That’s what we set out to do tonight,” commented an emotional Sam Hafertepe, Jr.

Beating Sean on the initial start, the caution flew for Matt Covington who spun to a stop in the first turn.

With the No. 22 holding the lead on the restart, Hafertepe’s next attempt at the point came while working Lap 2, only to have his slide job negated by another caution. Pressuring McClelland on the restart, the Townline Variety No. 15h was not able to get the run as Sean slowly pulled away with traffic coming into play as the field worked past the tenth lap. Allowing Hafertepe to pull back in on McClelland, the No. 22 did not falter on the low line; using slower cars as picks to protect any run to the outside.

Taking their high-speed chess game into the mid-point of the A-Feature, Hafertepe pulled the trigger on Lap 23 to take the lead but had his advance quickly answered with Sean driving back around the No. 15h. Battling hard into slower traffic, the caution lights came on with 25 laps complete as Blake Hahn spun to a stop.

Getting away from Sam on the restart, Sean continued to roll the bottom as Hafertepe searched the middle and high line at both ends of Creek County Speedway. Building momentum as the leaders worked to Lap 30, Hafertepe took three runs at Sean McClelland with his run on Lap 34 off the turn-two cushion being the one that secured the lead. Quickly through traffic with the lead in hand, Sam opened his advantage to 3.582 seconds at the finish.

Holding off Seth Bergman on the final lap, Sean McClelland crossed second for his ninth career podium finish with the Lucas Oil American Sprint Car Series presented by Sawblade.com. Bergman third was followed by Jason Martin with Kyle Bellm making up the top five. Charging out of the first B-Feature, El Paso’s John Carney II raced through the field to sixth after starting 20th. Wayne Johnson in seventh had Blake Hahn recover from his caution to finish eight. Skylar Gee advanced six spots to ninth with roger Crockett tenth.